In love with South Goa! 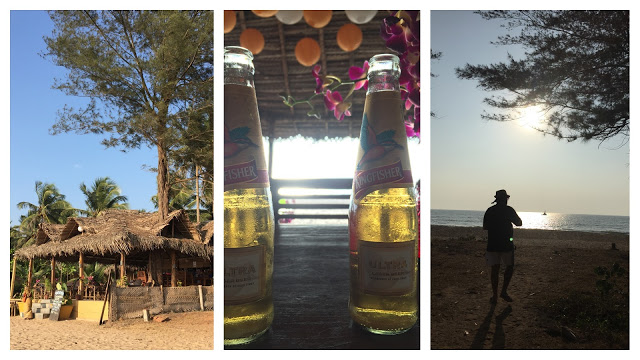 After exploring North Goa a number of times, we decided to check out South for once. My friend always vouched for this and had told me that we would love #SouthGoa and would never want to go back to North. Oh boy, he was right!
We booked our train tickets as we had few days in hand and decided to take overnight trains for both ways.
Picked up dinner from McDonalds enroute station. The train journey was good a decision! After a tiring day at work, we needed some good sleep. Had our dinner and slept like a baby! We reached our destination (Madgaon) around 8 AM. We picked our cab right outside the station for around 1,000/- for our hotel in Palolem.
So our home for the first 2 nights in South Goa was ‘Crystal Goa’. Decent place, nothing fancy. The breakfast was really good so if you don't want to stay here, just go over for a good breakfast or meal.

We reached quiet early, so we decided to have a quick breakfast at our hotel we were staying in. It’s a quaint boutique hotel. They have a restaurant ‘Palolem Inn’ which served really good food. The crowd was 70% tourists and 30% Indians. We were told our rooms would be ready by 1ish so we decided to check out the beach and stroll about. The beach was like 5 minutes away from our stay.

Here’s a sneak peak of the beautiful beach. It felt great that we chose South Goa this time. 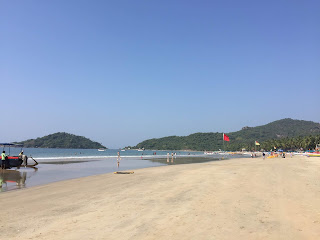 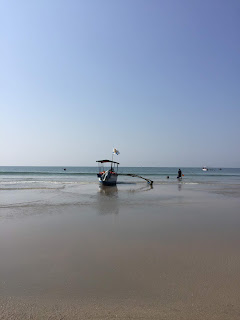 Hair braiding is a big no! They charge you about 2,000/- here.
We found this Spa place right on the beach road and turned out to be a Ayurvedic one. Since we had some time in hand, we went for a couple massage. Post that, we went looking for places to have lunch. Trust me Palolem has lot many options when it comes to restaurants. We went to Fisherman’s restaurant by the main road for a nice quiet lunch.
We checked in, freshened up and left for Patnem which was a 20 minute ride from Palolem. This beach has one of the prettiest sunset in this stretch. There are fancier restaurants to choose, or you could simply crash at any of the shacks there - trust me the view is going to be the same. 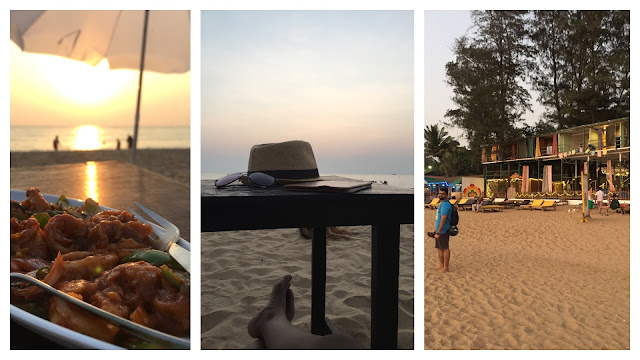 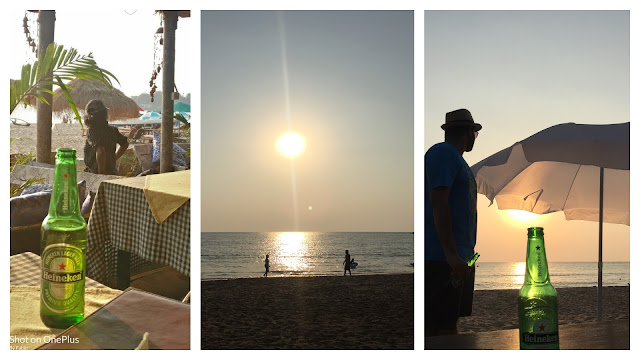 I managed to get my hair braided for cheap here (100 bucks) by a local vendor.
We headed back to our hotel and decided to get some dinner at one of the beach shacks at Palolem. Followed by crashing at the only place which is allowed to be open 24*7 in this part of south Goa.
Please note: South Goa shuts off very soon (don't expect the same vibe as in the north).

Next day we decided to ask locals on what's the best thing around here. They suggested to take a boat and go see dolphins and visit the nearby islands as well. Here's our ride! 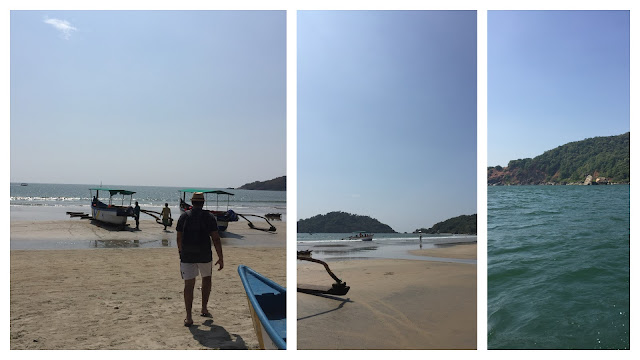 Not a fancy ride, but it was great! Saw Dolphins, many of them.
We got off at Honeymoon Island which had another group chilling, that's about it. We had the whole island to ourselves. There is one vendor who sells fruits & beverages (beer too) which you can pick up for a good price. 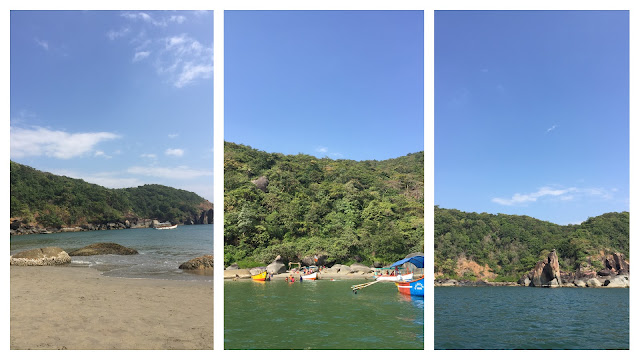 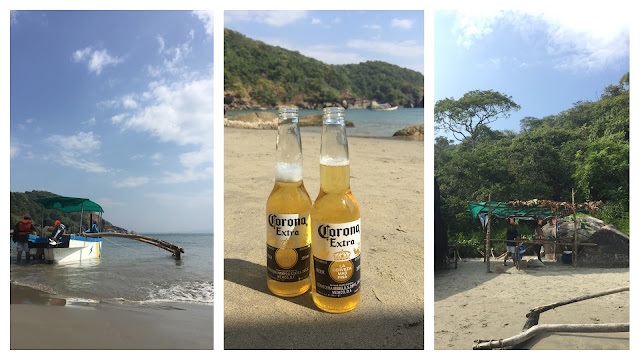 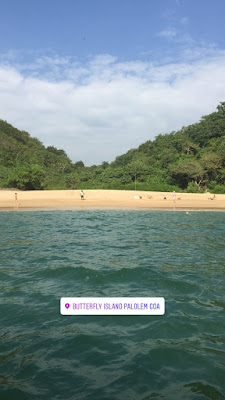 Next stop was butterfly island and because it is a steep shore we did not dock there. From our view, we could make out why the Island was named that.
Both these islands can be explored by road too, just that it's a nice trek. There were travelers who had there canoe and had set up tents on the beach to chill.
We returned back, as we wanted to explore the other virgin beach - Agonda. The route to this beach is the most scenic route in our entire trip. Lush green farms, with churches, coconut trees, less humans (not talking about locals). 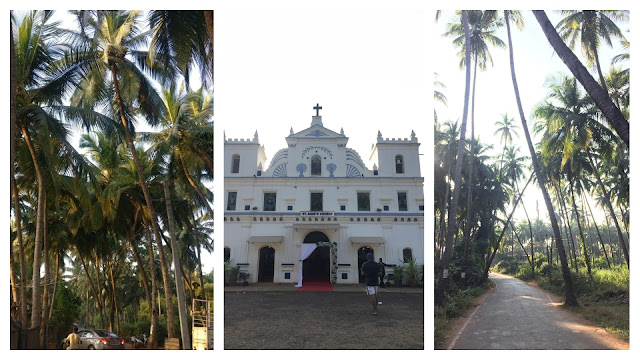 Agonda was the most peaceful beaches of the lot, even with hotels right near the beach. We had a couple of drinks from a shack and left to stroll the beach. 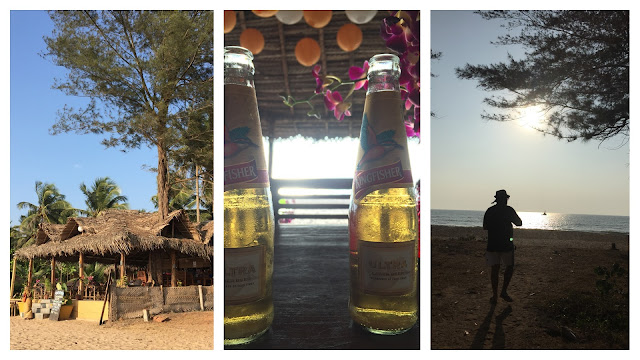 Enroute back, we had some lip-smacking anda paav from a street vendor. Some guilty pleasures!
For all those who love to all crazy, check out Leopard Valley which is known for techno nights. Everyone you ask for nightlife scenes will suggest you that. The road to this place is pitch dark so suggest going in only if you have a car.
We were not up for it so we crashed at another beach shack and retired for the night! 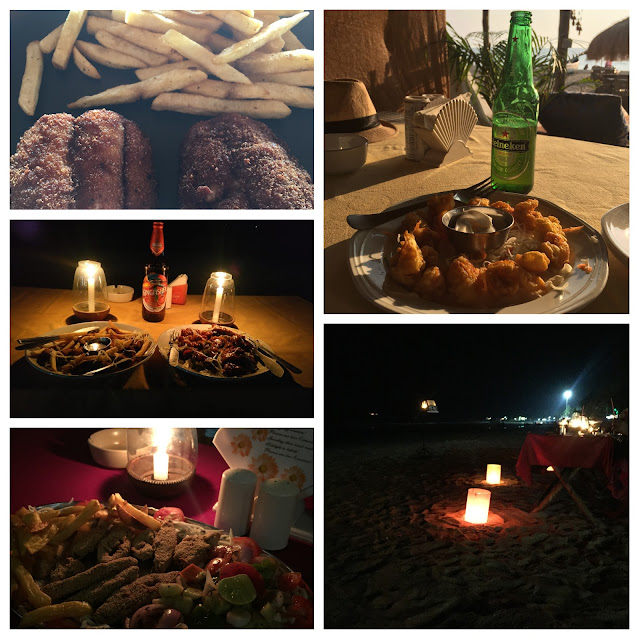 Palolem offered us some great shacks with good food.

We said goodbye to this part of South Goa and left for Colva (more chaotic version of South Goa). The hotel guys managed to get a cab for us. We had booked an OYO in Colva, which was a bit difficult to spot in the clutter of OYOs next to the beach. We freshened up and left for the beach and man what a disappointing sight! All aunties and uncles, a sea of them on the beach. All we could see were heads on the beach. We walked along the beach for good 20 mins to find a spot with less humans.
Relished on this amazing dish! 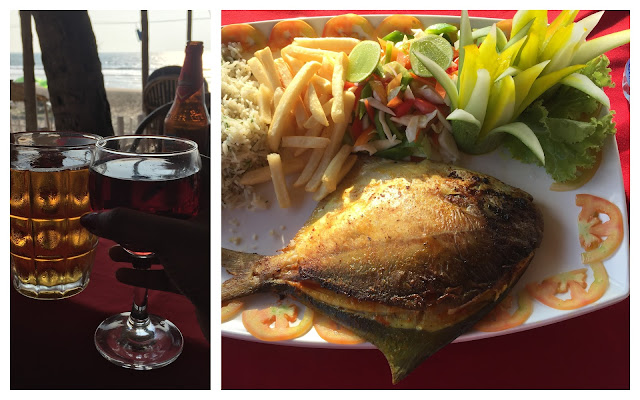 We sat at this shack till the sun was almost about to set and the view was obviously beautiful. We wanted to check out the nearby beach so we took a nice sunset ride to the other beach - Benaulim.
Had a beer or 2 and left for the hotel.
Colva on the left, Benaulim on the right, below! 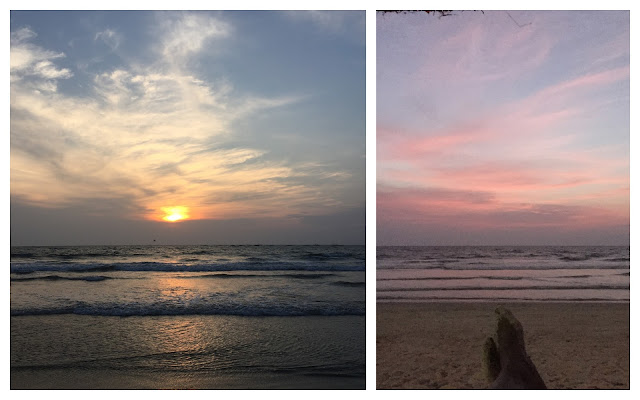 Nightlife in Colva isn't that great either. I checked on Google and got 2 suggestions - Boomerang shack at the beach + a lounge in one of the hotels. We decided to go with Boomerang, which is at the other end of Colva. And this one had lesser people!

Day 4 was hungover day. We had a great time at Boomerang so we just tried to get sane before we catch our train back to Mumbai in the evening. Decided to catch a nice heavy lunch at Martins and call it a day. The ride again to Martins is super pretty. 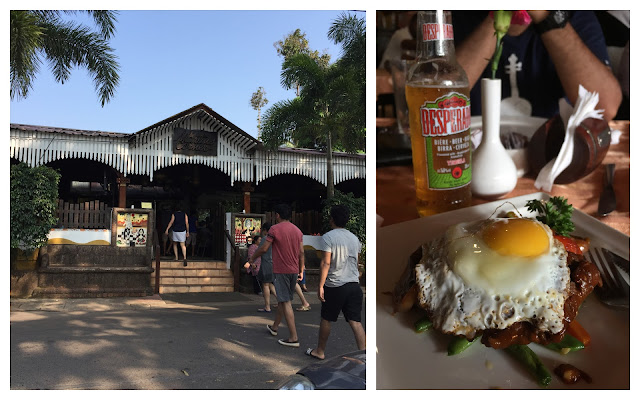 Rode back and left from the hotel. Well on the way picked some cashews, and other goodies for the family. That was about our trip!
Just so you know, note the below pros & cons.
Pros:
- Less humans, more peace
- Good food options
- Good cozy stay
- Cleaner beaches
- Less commercialized (try to make the most of what locals have to provide)
Cons:
- Almost zero nightlife (if that matters to you)
- This part of Goa shuts down pretty early
- The roads specially around Agonda-Patnem stretch is a wee bit scary at night
Colva etc is more commercialized so expect a lot of people (a sea of people to be precise). This is the happening part of South Goa. A little km up & down (the other side of the hill) will be the quieter part of south Goa, which is Palolem and the likes.
We explored both the places and fell in love with the latter :)
GOA all in all is a vibe all together. It's what you want to make out of the place. There is something for everyone.
Goa! Wannabe Wanderlust Diaries

Popular posts from this blog

A little bit of everything!

September 26, 2013
Well, about me - I'm not totally great, I'm not completely stupid, I'm not an angel - but I'm a little bit of everything and that makes me!  Always thought life was perfect. It is but not in way that you get whatever you want! If things go wrong, it won't last. If things go right, it won't last either. Life teaches you lessons throughout. You either digest it or just crib - it's your call. Never regret because if it's good- it's gonna be wonderful and if it's bad- it's gonna be an experience.  I have seen myself transforming from a very shy little girl to being a not-so-quiet little(even now) girl. A girl who never really opened up in school - to someone who had to be whacked so that she would shut. How did that happen? The answer to this question is my next blog. #WINK  Talking about my life, There were people who kept telling me to forgive and forget?? Well my way is a bit different.. I forgive but I NEVER forget, I Learn from
Read more

Dedicated to my crazy + stupid + insane friend - My Bestie. This blog is all about the bond that we share and which keeps growing stronger, and continues till date. I don’t care what the world thinks about him. For me he’s the bestest and that makes him irreplaceable. Why is he so special? Well well, he hits me when I’m wrong. If he gets to know that I have done something that I shouldn't have done in the first place, there’s nothing that can stop him. This is when he considers me to be some kind of a *HIT/PUNCH/SLAP/WHACK ME* doll. Me being a fragile person, it actually hurts (#PUPPYFACE). Point to be noted - He WON’T apologize. Which means, I freakin deserved it. He knows me better than anyone else. He can read my expressions and clearly figure out when I’m lying. He knows when I need him the most and makes sure that he’s there by my side. Waiting for me at odd hours when he knows I’m fed up with life and desperately need someone who can hear me out. I don’t k
Read more

The One At Majestic Mussorie (Queen of the hills) 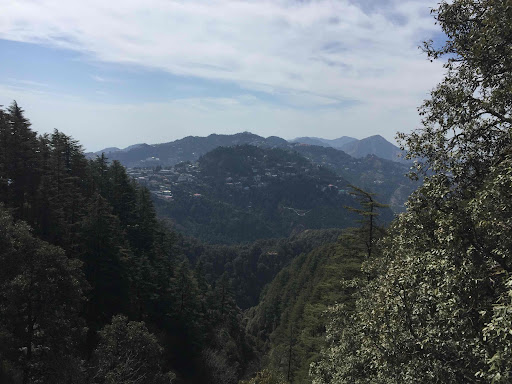 Husbands 30th birthday and that had to be special. I have never really explored the north and was looking forward to a trip sooner. I am a mountain kinda person and he is well a beach-y person. So we juggle our holidays around this. Our last holiday being Bali, the next was to the hills. Mussorie was the best option that I could find to travel in March. Booked tickets 2 months in advance on Make My Trip and guess the price - 10k for 2 people - to & fro. Steal! Anyways we packed our warm clothes, boots, etc and set off for the hills. Did my research on what to do and all too, as usual. I believe that you must do your research before you scoot, but that being said don't stick to the itinerary - BE FLEXIBLE with your trip. You've come to relax so do that. DAY 1 We took the Mumbai to Delhi early morning flight, after a 1.5-hour layover at Delhi where we grabbed breakfast at the forever-crowded-food-court, we boarded our next flight from Delhi to Dehradun. The view
Read more